When patients need to be airlifted to medical care in an emergency, the first priority is getting them to the right healthcare provider as quickly as possible. Patients are at a disadvantage in this urgent situation because they cannot determine whether air transport is a medical necessity, nor are they equipped to direct which air ambulance provider should transport them. This can lead to surprise expenses when the air ambulance provider does not have a contract with the patient’s health insurance plan. The patient may then be billed for the full charge of the flight or the balance left after any payment by the insurer for the out-of-network coverage.

Over the last 15 years, there has been a dramatic change within the air ambulance industry, with a rapid expansion of operators entering the market, particularly increasing the number of vehicles run by for-profit carriers. Those market changes have had far-reaching effects on the costs patients must pay for services, and have resulted in patients receiving unexpected, exorbitant bills for tens of thousands of dollars for emergency transportation that the patient assumed would be covered by their health insurance.

Unexpected air ambulance bills are often the result of a common practice known as “balance billing” – when a provider charges patients for outstanding balances beyond what the insurance company has paid the provider. Consumers are generally protected from this practice if their insurance company has a contract with the air ambulance provider but out-of-network providers are not bound by in-network rate agreements.

The Court also invalidated the legislation attempting to ban the sale, solicitation and negotiation of air ambulance subscription agreements in North Dakota, concluding that this law was also pre-empted by the Airline Deregulation Act and was not saved by the McCarran-Ferguson Act, which offers some protection for state laws that govern the “business of insurance.”

The provider and the health insurance plan must either negotiate a reimbursement amount or utilize an independent dispute resolution process via arbitration. If the out-of-network provider and the health insurance plan cannot agree on a payment rate through negotiation, they must enter into an arbitration process and each submit their final proposed rates to the arbitrator, who must then choose one of the proposed rates. The arbitrator must consider certain factors, and determine the final reimbursement amount.

Regardless of whether the reimbursement amount is reached through negotiation (between the air ambulance provider and the health insurance plan), or through arbitration, the patient is protected from any surprise balance bills above and beyond the amount the cost-sharing amount they would pay for in-network air ambulance services under the terms of their health insurance plan. 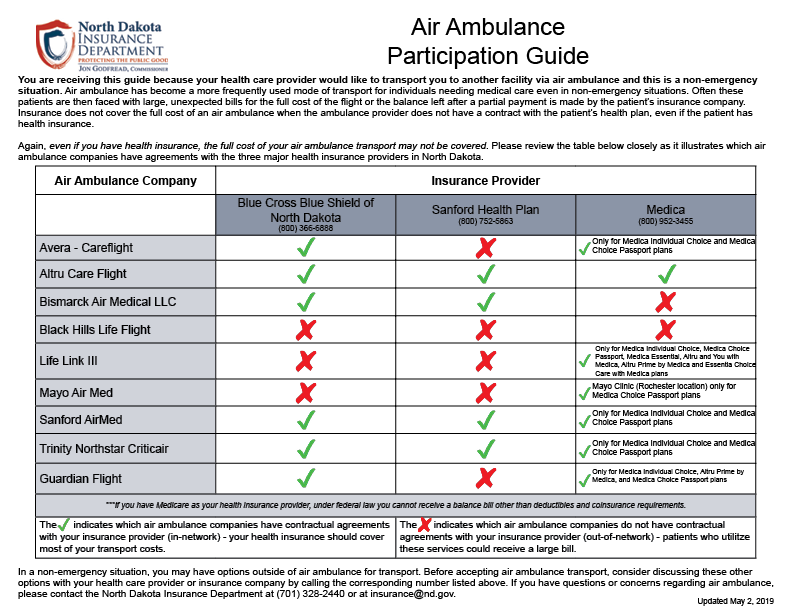